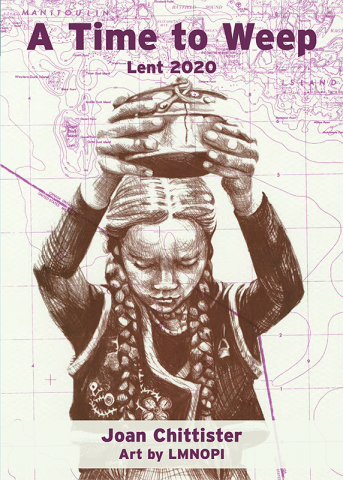 Reflections, actions and resources to accompany Week 1 and Week 5 of A Time to Weep
by Joan Chittister and reflections from the artist LMNOPI

Week 1: Immigration
Making the immigration/refugee issue a priority for you this Lent

“Migrants are persons…
They are the symbol of all those rejected by today’s globalized society…
The weakest and most vulnerable must be helped…
This is a tremendous responsibility, from which no one is exempt
if we wish to fulfill the mission of salvation and liberation,
in which God has called us to cooperate.” —Pope Francis

Week 5: Climate Crisis
Turning tears of anger for the destruction of the earth into acts of hope….

Reflections from the artist, LMNOPI:

Street artivism is where street art and activism intersect. In a world where protest marches have become more like parades and being inundated on social media with petitions, memes, news and opinions can have a numbing effect, outrage fatigue can leave us feeling anesthetized and apathy can arise from the sheer enormity of issues confronting us. Street artivism can disrupt a person’s day and it is the element of surprise that catches them with their guards down. This is a potential juncture of disarmament, where the emotional impact of a message can rewire and perhaps begin to change a person’s perspective, if not at the very least; to plant a seed.

I believe that the emotional impact of seeing intense eyes staring out of a painting increases the emotional impact on the viewer. Eyes demand eyes to look. Staring into the eyes of our original caregiver provided a powerful imprint which remains as a sort of portal for entry into one’s psyche.

This collection of prints originated in my street art practice; either they were originally a mural or at one time they were a series of wheatpastes that found their way into the commons. The connecting motif can be summed up in one word: Uprising.

Notes on process:
When I created this one I thought it particularly profound to have the words PRIORITY MAIL above the heads of these kids, two boys who walked all the way from Guatemala to the US Mexico border. If only they could be treated as well as priority mail, yet they are being used for the political agendas of the right wing oligarchy that is presently imprisoning them in detention facilities. Many are separated from their parents never to be reunited.

In the print edition, I utilized a topographical map of the southern border. Many of the people attempting to migrate and flee the effects of the climate crisis and violence in their countries are Indigenous and their relationship to the continent pre-dates borders.

The pattern in the older boy’s shirt suggests the border fence in Playas de Tijuana, which extends into the Pacific Ocean. If you follow the boundary line, which is the Rio Grande, it cuts through the child’s chest, enters under his chin and comes out through his forehead.

Autumn Peltier is an Indigenous youth activist. At 14 she had the honor of being named Anishinabek Nation Chief Water Commissioner. She is from the Eagle Clan Anishnaabekwe from Wikiwemikong Unceded Territory in northern Ontario. She’s been advocating for water since she was 8 years old.

The map in the background shows the so-called border between the US and Canada and the islands where Autumn lives. The Anishnaabekwe have made their home for thousands of years and they continue to resist ceding their sovereign rights to Canada.

LMNOPI has been a community organizer, humanitarian worker, and civilly disobedient activist over the last four decades, standing elbow to elbow with the people and communities she depicts in her work. She is a traditionally trained painter and printmaker dedicated to street art activism. Her skillful brushwork and signature palette lend her works of art an unmistakable timbre. A terrain of strength and humor, defiance and resilience, love and bravery emanate from the faces of the women and children she paints.

Her print work is part of a historical archive of Occupy artists titled Occuprint which is in the collections of many distinguished universities, museums and libraries such as Harvard University Art Library, University of Applied Arts Vienna, Library of Congress and the Museum of Modern Art. Her public works can be found on the streets of cities across the United States, Mexico, France, the UK, Germany, Canada, and Haiti.

LMNOPI relocated to the Green Mountains of Vermont in the fall of 2018 and she continues to amplify voices deeply rooted within the Economic, Social, and Climate Justice Movements. She remains a dedicated and stalwart accomplice to the leaders of Indigenous and Youth led activations.