A Christmas message from Sister Joan

The very scandal of Christianity lies in the fact that it sees divinity in humanity. It’s a hard idea to swallow, after all. Every major religion recognizes the role of the Creator in the development of life, of course. But in it? Part of it? Identified with it? Gods everywhere look down from the heavens of the world religions and pronounce laws or grapple with demons or pass judgment from on high. Only Christianity argues that the Creator has taken on the flesh and blood of creation in order to bring us to assert the divine in ourselves.

In the Christmas story we see God become helpless, become like us, become subject to the tensions of growth, become flesh so we might have the confidence to recognize that we have the stuff it takes to become like God.

So what is this about renouncing flesh? How can we call the way God made us inherently bad as philosophers have done since the time of Aristotle?

The poet Elizabeth Barrett Browning says of it, “Earth is crammed with heaven.”

The flesh, in other words, is all we have. It is our glory. It is our power. It is sweet. It is beautiful. And it is the clay out of which we shape a better tomorrow.

REMINDER:Beginning on December 17, you can listen to the O Antiphons as sung by the Sisters’ choir at Mount Saint Benedict Monastery, Erie, PA. Click here. 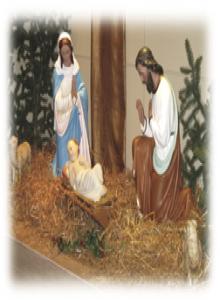 The Benetvision Store offers many of Joan’s books for sale. Purchasing them through Benetvision directly supports Joan’s work. When the book isn’t available from Benetvision, Buy Book links directly to the publisher where your purchase can help keep the publishing marketplace more equitable